My Falken Ziex tires were wearing pretty low and then I got a nail in my tire. I plugged it up myself to buy some time but after a run through Cherohala and the Dragon I guess it had enough. Now it leaks and these tires aren’t worth patching up but I had a spare set of used tires on CL. 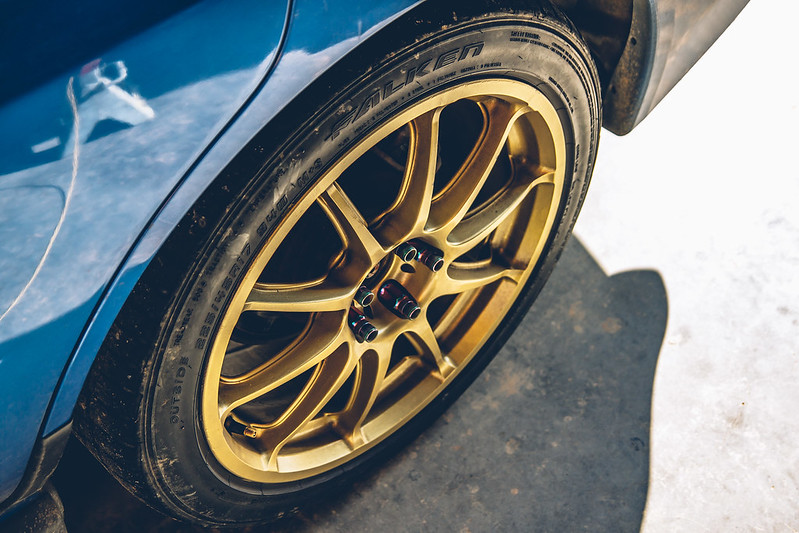 I grabbed a set of 235/45/17s Bridgestones from what turned out to be a friend of a friend. I soon realised I had seen these tires before on a friend’s WRX. The car world is pretty small I tell yah. The tread on these wasn’t much better than what I had but they didn’t have any holes in them so I decided I would try mounting my own tires with this tool.

One small problem. I forgot that ordering tools from Harbor Freight takes forever. I ordered the tool earlier this week and as far as I can tell, it still hasn’t left California. 😦

And of course my leak went from leaking 10 psi overnight to 10 psi an hour. I couldn’t wait on HF anymore so I headed over to tirerack to look at some new shoes.

My initial plan was to get a set of ultra-high performance all-season tires. After going back and forth between your Pilot Sports, RE970s and G-MAXs (and everything inbetween) – I remembered that I hated all-season tires. Made one click over to ultra-high performance summer tires and literally bought the cheapest tire I saw almost immediately. They had good reviews and they were about $300 shipped. When in doubt, choose grip. 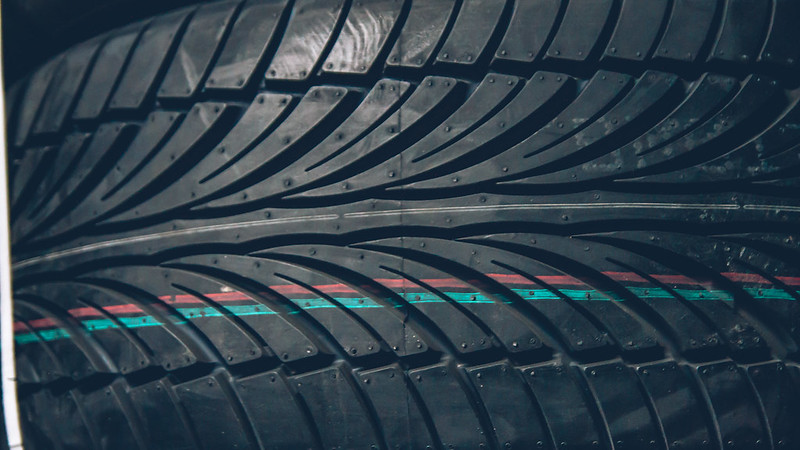 Now, I have never heard of Riken tires so I will post a review after I get some miles on them. But I have had good experiences with cheap summer tires on my Subies. So I guess in some weird way I am going back to my roots. Haha! 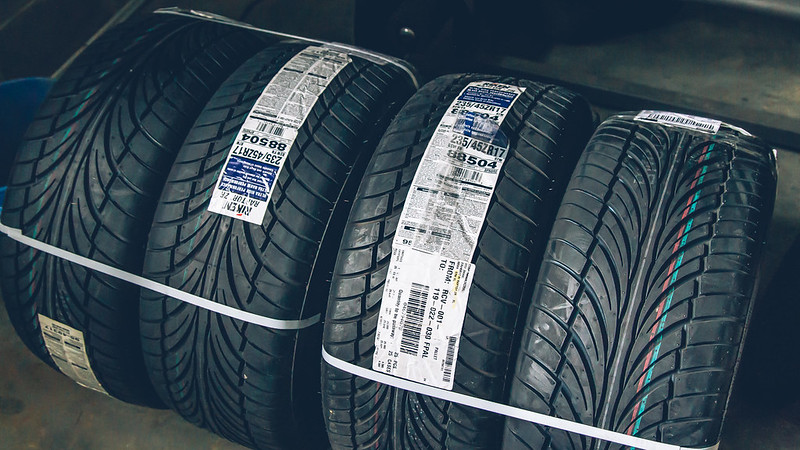 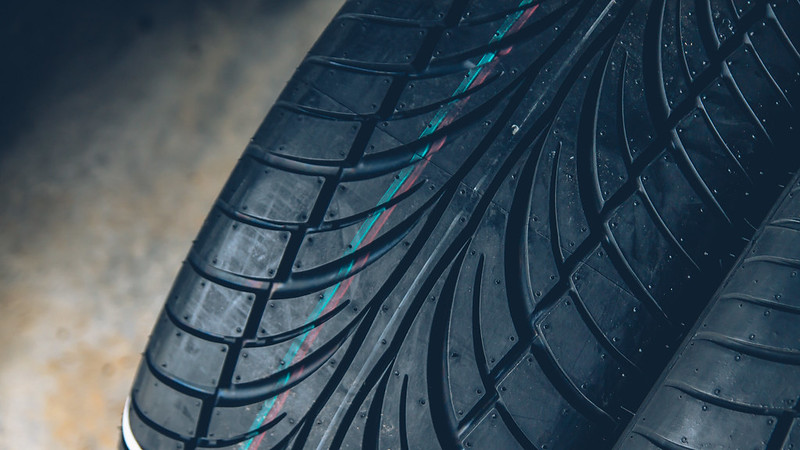 Tires arrived the next day and I semi-scheduled an appointment with a friend that works at a nearby shop. 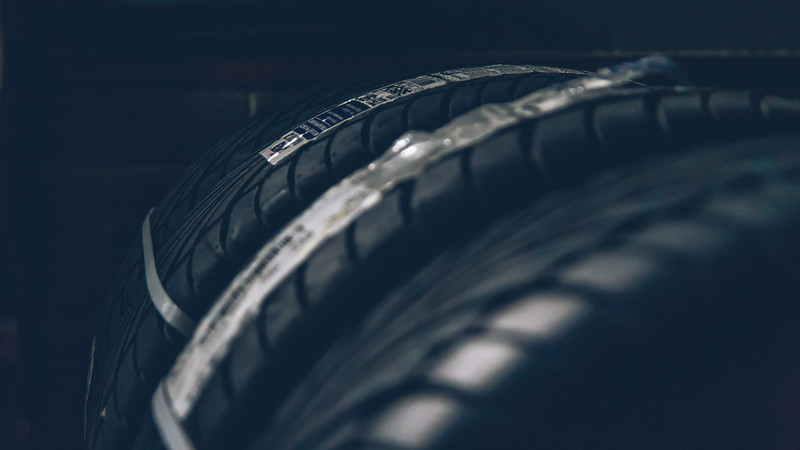 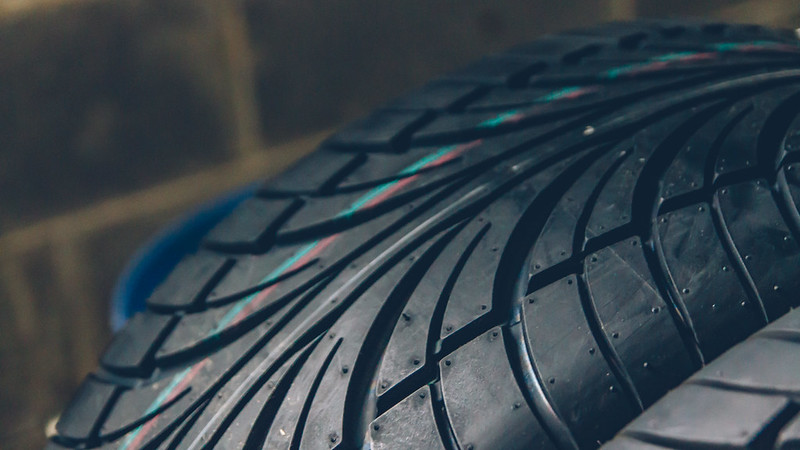 I arrived later than I wanted but David was expecting me so he took my car back right away. He mentioned that the tires required a lot of weight to balance out. So if that is something that matters to you then I would probably avoid these tires. They seem smoother to me, could be the extra width, could be the tire pressures, I don’t know.

While I was there I had the car aligned. Good thing too, my front driver’s side toe was way off. I suspected it was, but these wheels don’t play well with the toe plates. My camber was less than I expected. I guesstimated around -1.5° each, and it was actually -1.2°/-0.9° (L/R) up front. I felt like my caster was pretty low, even with the Whiteline top hats, but this confirmed it at 3.x°.

I’m pretty sure my strut spacers are on the wrong side, and I swapped them out a few days later and the steering feel is much better. I won’t know for sure if my caster changed until I go back and have my alignment checked.

So after my car was done, I drove it home in the cold rain and the tires seemed to have plenty of grip. That could be from having zero’d out toe, could be the tires, or it’s probably both. And I will be damned if this thing wasn’t waiting for me when I got home. 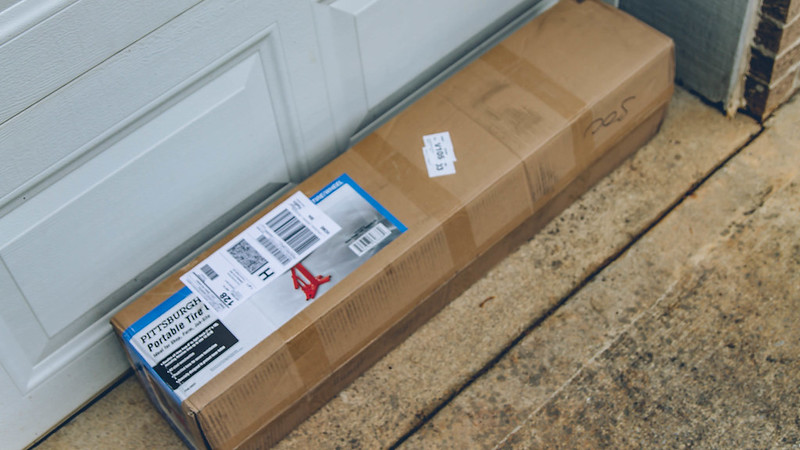 I had other things on my mind though. This gold paint was chipping and frankly it wasn’t for me. It’s a classic color combo but I wasn’t feeling it on my car so I had to go. 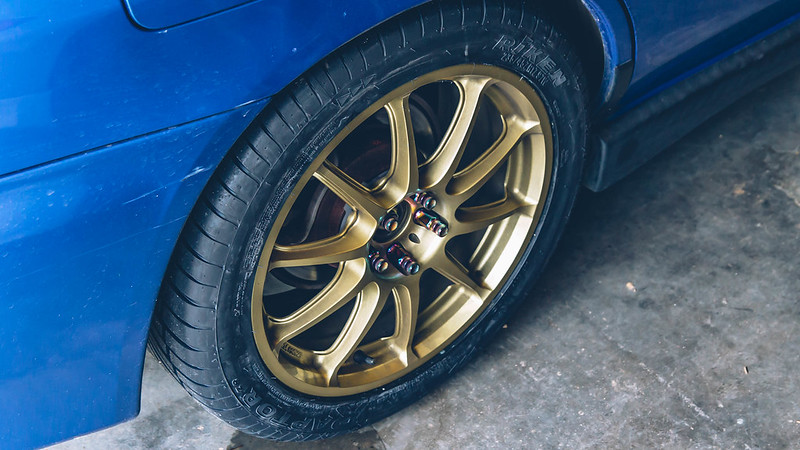 I don’t plan to keep these wheels forever so I didn’t strip them all the way down to bare metal, nor did I have the time to do so even if I wanted to. 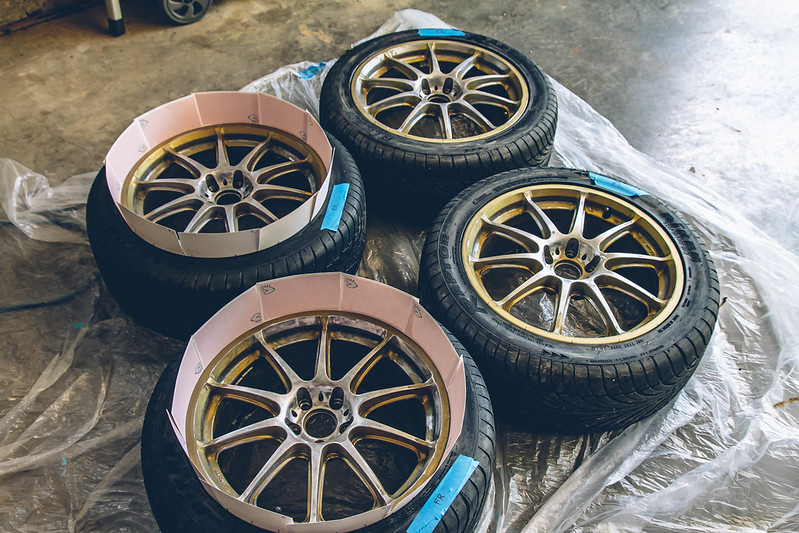 After stripping them down as much I was could tolerate, it was time to hit them with some primer and then start spraying them black. 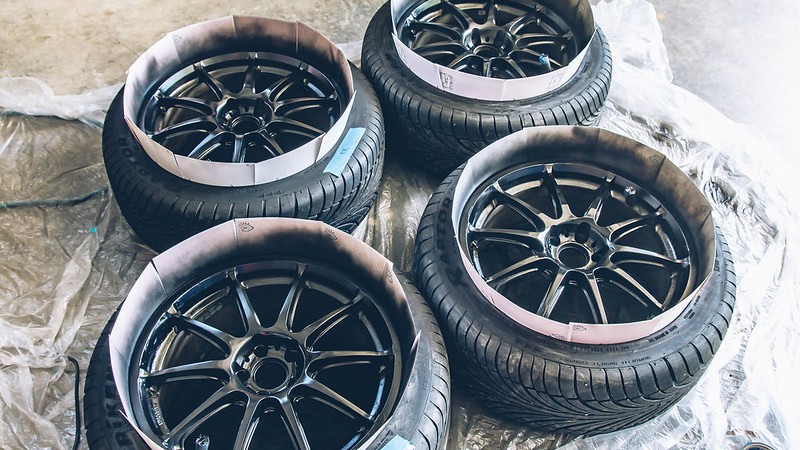 I had some leftover metal flake clear so left so I give them all a coat to see what it would look like on the black paint. I think it looks great. I may try this again on a set of wheels that I like. 🙂 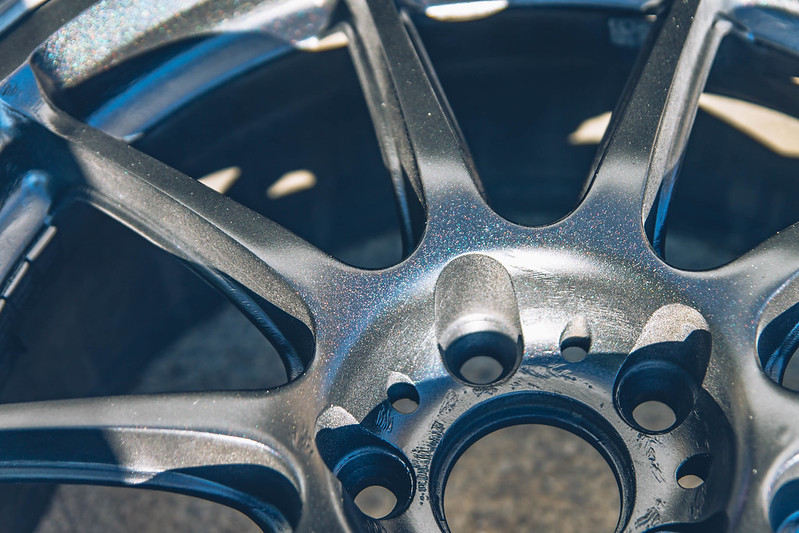 They came out decent for the work I put it. Obviously they would look better if I stripped them down all the way. They make decent 10-footer wheels for now. Considering the road I live on, they will probably get beat up some more. 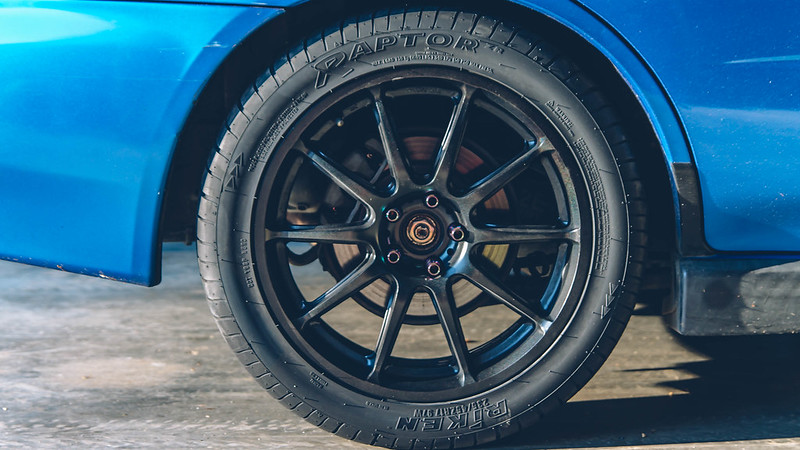 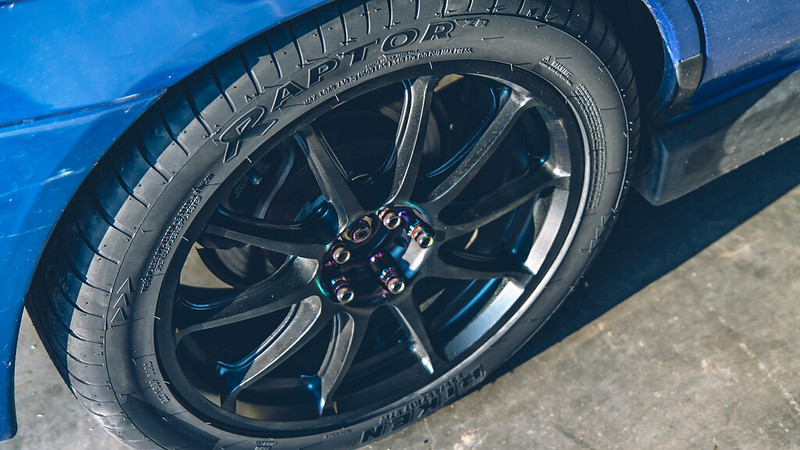 I really like how the neochrome lugs look against the black wheels. 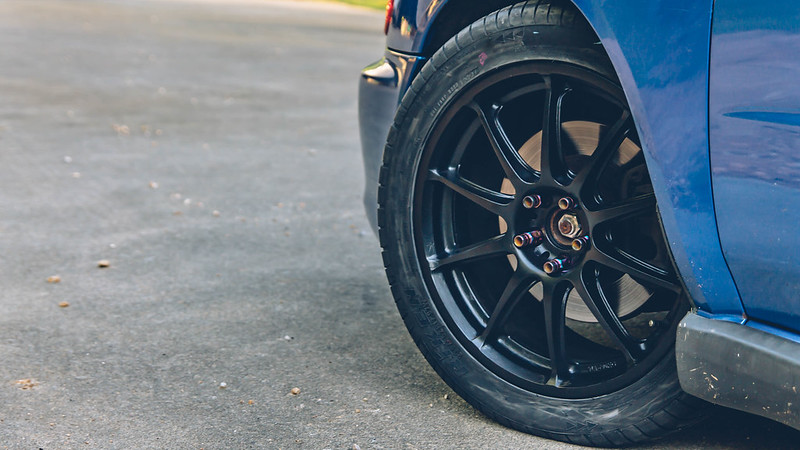 Overall, I like how the new setup has turned out. Tires look meaty while only being 235s and steering response and handling improved as well. I was a little worried about going with a 235 on a 7.5-inch wheel but a little extra air in the tires fixed the somewhat soft (for a summer tire at least) sidewalls. But for the most part, it looks pretty square… maybe a slight pinch. 🙂 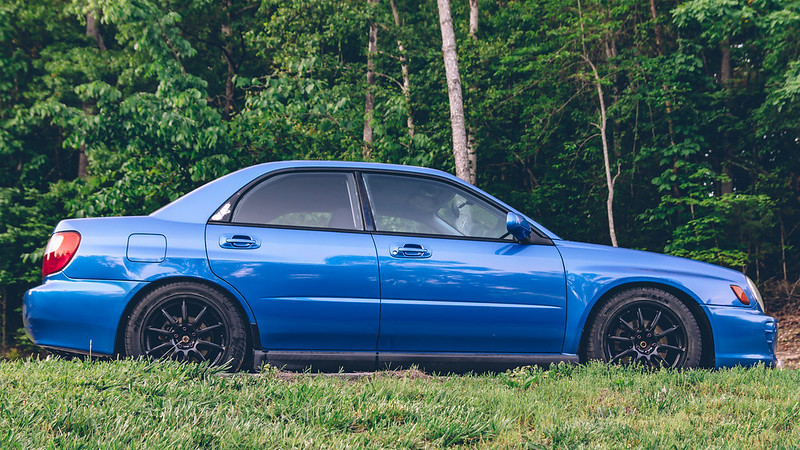