With the insanity going on with the virus, I could not wait for spring break to work on my Bugeye. I initially wanted to work on my front bumper, but after running my clutch a little too hard, it was finally time to replace it.

However, to keep things fun, I decided to paint my one wheel that I never painted along with my calipers since the car was going to be down for awhile.

After getting the car on jack stands, I didn’t really feel like dropping a transmission onto the ground just yet, so I started with my wheel.

It came out ok. But I messed up and sprayed the highlighter yellow right over the matte green primer and then I ran out of paint.

While I waited for new paint from Amazon to arrive, I got started on peeling away parts to get to the transmission. After I pulled off the turbo and downpipe blankets, I realized that they were both pretty trashed.

I need to find another solution other than replacing these every couple of years; although I will probably just wrap the downpipe.

I also found out my downpipe has two cracks on each side of the resonator. So that’s fun. The only reason the resonator hasn’t fallen off is probably because of the bracket that’s welded on to it.

And just to keep the good times rolling, it was finally time to drain the transmission fluid and get this garage smelling like gear oil for the foreseeable future. Luckily, I would lose my sense of smell after seeing this.

Yep, that’s almost a whole gear tooth from third gear. Who knows how long it has been like this. Could have been recent, could have been like that for years. I don’t know. I wasn’t sure what I was going to do about it at the time other than fixing the stuff I was planning on fixing and figuring the rest out later.

However, at this point, I didn’t know what gear it was or how much metal was in the case or what the condition of the other gears was. And since I had a reseal kit to fix all the leaks, we are going to crack this transmission open.

I would recommend placing a jack (and a block of wood) underneath the engine to tilt the engine back. Once you pull the transmission away, the engine wants to tilt forward, and you end up fighting the engine the more than necessary. It’s not like you are balancing 100 lbs of metal over your face or anything.

One thing I noticed was that the bell housing was coated in oil. I expected to find a bunch of oil on the engine as well, but it actually looked pretty clean.

On the bright side, the clutch still had some life left and didn’t look as bad as I was expecting.

And it turned out that my turbo drain hose was leaking. I ended up ordering another one from FastWRX.

So, my oil leaks must of been the drain and the pcv lines as the oil separator cover and the rear main seal were dry. Since I bought replacements, I am just going to go ahead and replace them.

Returning to the transmission, removing the tail shaft housing was an absolute pain. It’s nearly welded in place. So much so that if I didn’t need to find the remaining metal in the case I would have fixed the seals that I could, and run it until I could afford a replacement. However, we lost power for a few hours and I had nothing better to do than hit glass transmission with a hammer (TIP: hit the dowel pins with a punch).

Honestly, considering that this transmission has nearly 200k miles on it, it looks pretty dang good. The exterior looked much worse.

And then I found my prize – a snaggletoothed third gear.

I didn’t really know what to do at this point. This is just a timebomb waiting to go off. I don’t use third for power pulls with the EJ207 (except for data logs for e-tunes), I use second for that honor. Third gear is for cruising down 45-mph roads. Fourth gear drops the RPMs way too low for the 2-liter engine. I could limp the car along in its current state for a while, but with the lockdown going on, I’m stuck at home anyways.

So, I just pretended like I didn’t see what I just saw. I checked for more metal, replaced the seals that needed to be replaced, and slowly started the reassembly process so I wouldn’t forget how to put this thing back together once spring break ended.

I started thinking about my options; the obvious choice is the 6MT. I found that Legacy GT Spec B transmissions can be had for under $2k. They have a 1.1 transfer gear so I wouldn’t need a new rear diff; just new driveshaft. However, the more I researched the more I realized that the Spec B 6MT wasn’t a great bargain as it seemed. The front diff is open and is missing the speedo gear. So you will need to swap to an STi front diff and bell housing to run this 6MT in a Bugeye or any Subaru that needs this sensor. And since the goal of this car is to stay light as possible, the approximately 200 lbs 6MT would add over 80 lbs to the car.

The next best option (in terms of strength) are straight cut or helical PPG gears for the 5MT. Since third and forth driven gears are attached you have to buy them as a pair. It would be nice to get just 3rd and 4th gear as the teeth are pretty tiny for the WRX. Unfortunately, PPGs are not cheap, they run $1,500 for just third and fourth gears.

And there are the v6 STi gears, which are the same as the LGT or GR WRX 5MT gears except for REM treatment. The teeth are thicker (not wider) than the 03 WRX gear, but about 10% slimmer than the RA gears. Also, for the Bugeye, the ratio for third is a little bit longer (1.366 vs 1.296); forth is the same.

Here is a video from Flatirons Tuning that compares the 5MT gear sets.

Rallispec also has a good little Tech Faq as well. Flatirons has little write-up as well.

I ended up placing an order with Rallispec for the RA 3rd/4th gear set, along with the metal speedo gear that they recommend; and they arrived in about a week.

It hard to tell in on camera, but in person, the difference is easier to see. 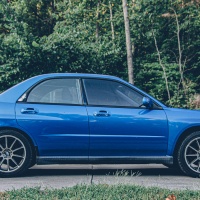 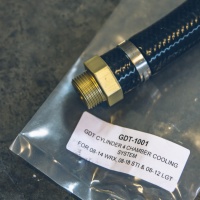 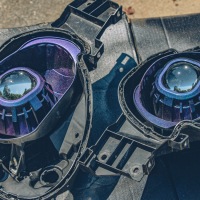 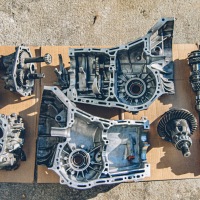